The SD Card from the TAR-3 Resistance Meter
Your results! The results are copied to the TAR3DATA.TXT file at the end of the grid and saved onto the SD Card.
A PC with the 'Snuffler' software
You can download a copy of 'Snuffler' software from here.
Your notes!
When using the TAR-3 Resistance Meter you should make a note of the order you survey the grids and the direction(s) you traverse the grids.
You should also record the survey's position/location so that you can identify the position of any anomalies on the ground.

Open the cover on the rear of the TAR-3 Meter. The micro SD Card is held in a 'Push – Push' holder. To remove the card push it in and allow it to 'spring' out. The card can then be removed from the holder by sliding it out (use a fingernail – the SD Card has a lip to aid removal).
Warning: You must 'Push' the card and allow it to spring out. If you force it out by pulling you may damage the card or holder.
Note: The micro SD Card is small, avoid removing it in the field – it is easy to lose in long grass!

Run Snuffler
Open the Snuffler program.
Create a new project
You create a new project using the File::New Project command on the menu bar – name the project eg. Test_Date
Copy your data file into the project folder, Test_Date
Insert the micro SD Card into the 'micro SD Card to standard SD Card adaptor' or into the 'micro SD Card to USB reader' and plug it into your PC. Navigate to the 'Removable Disk' and copy the TAR3DATA.TXT file into the projects folder (eg. Test_Date).
Import your Grid Data
Use the File::Import From File::Import Frobisher Data File command to import your data. (Read the section below regarding importing grids and grid numbering). 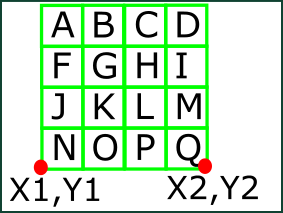 survey team has planned to survey a field. In the office they positioned their grids as shown above. To 'Geo Reference' their grids (and to find them again) they need to know the position of the grids. They can do this if they know the position of two points. (X1,Y1 and X2,Y2, see above). The two positions may be 'surveyed in' or be fixed points (such as a wall, Trig point, or other feature that can be identified in the future) and are used to locate one of the axis, see below.

The grids can be aligned in any direction and the user can survey them in any order. The surveyor can start in any corner and walk in any direction. It is important to record:

The selection of reference/fixed points is outside the scope of this application note.

To prevent users deleting data, the TAR-3 Resistance Meter automatically increments the GRID No – users cannot delete grids using the TAR-3 Meter. Grids can only be deleted using a PC!

If the TAR-3 Resistance Meter had been used before, and the SD Card contained results from a previous survey, then the grids would be numbered sequentially, continuing from the previous grid number. Users cannot set or change the grid number. It is automatically set and updated by the TAR-3 unit. If the TAR3DATA.TXT file is deleted (using a PC) before starting a new grid the file is created and the results from the new grid(s) appended to it.

The following day the same SD Card is used and:

Before importing the grids users may delete unwanted grids from a copy of the TAR3DATA.TXT file.

If the first four grids are deleted from a copy of the TAR3DATA.TXT data file and the file imported it to the project the software will renumber them 1 to 6!

During the import process users enter the start position and direction of travel once – this setting is used for all grids in the file. If different start points have been used (or different traverse directions), the grids must be imported separately. Cut and paste each grid into a new file – remember that each file must begin and end with a blank line

In a Snuffler project, each grid must be the same size if they are to be 'mapped' to the same 'view'

When the data is imported, a new Map File must be created File::New::Map File In the example above it could be 4 by 4 (ready for extra grids) or 3 by 2 for the six grids surveyed.

Right clicking the Map File allows the user to Spawn Main View and see their results (in black and white or multi colour.)

The Display::Display Settings (alt-d) shows the distribution of readings. There may by a few outliers (sometimes hundreds or thousands of Ohms different from the average) They may be the result of a wall above the ground surface or the result of 'poor' technique. Users should refer to their notes to decide if the readings should be deleted, marked as a 'Dummy' or edited.